Dance Your Way to Fitness 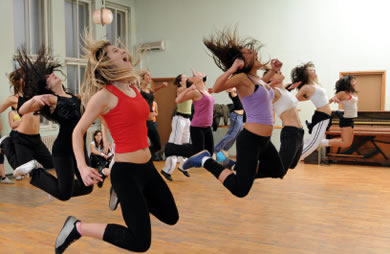 You’ve probably heard of the fitness craze Zumba, a workout known as a dance fitness party. I originally tried Zumba with a friend by following a fitness DVD.While the DVD was fun and the hip-swiveling moves were a blast (and effective at working up a sweat!), the best part of the workout was dancing with my friend—and giggling at each other as we tried to get our hips to salsa, merengue and cha-cha-cha like the girls in the video.Fast forward a few years, where I stumbled upon Zumba in a group workout class. A few times a week, my fellow gym-goers and I would pack the room and steam the place up! People of all shapes, sizes, backgrounds, and ages would gather together, crank up the music and dance their hearts out. Our instructor had an infectious energy and the ability to make you believe that you, too, could dance like her if you just came to Zumba often enough. It was a blast—and a calorie-burner, too. I wore my heart rate monitor during classes and would routinely burn 400 to 600 calories every hour, depending on how much I put into the moves.The first class I tried left a huge impression on me: One hour in a room with people who were psyched about having a good time were dancing around to high-energy Latin music in a non-intimidating atmosphere. So simple, yet so amazing!

As much as I love Zumba now, I do wish that someone had told me what to expect and what to bring to class. It would have made going to those first few classes so much better. If you’ve been reluctant to try a class, read on for the ins and outs of getting your Zumba on!

What is Zumba?
Zumba Fitness is a Latin-inspired cardio-dance workout that uses music and choreographed steps to form a fitness party atmosphere. While many of the types of dance and music featured in the program are Latin American inspired, classes can also contain everything from jazz to African beats to country to hip-hop and pop.

Since its inception in the mid-’90s by creator Alberto “Beto” Perez, the Zumba program reaches 10 million people in more than 90,000 locations across more than 110 countries, according to its website. Over the years the cardio-centric Zumba classes have grown to also include specific programming for children (Zumbatomic) and seniors (Zumba Gold), along with classes in the water (Aqua Zumba), resistance training classes (Zumba Toning) and circuit classes (Zumba in the Circuit, at Curves fitness centers). There are also Zumba DVDs and interactive video games.

Who Should Take Zumba?
Zumba is truly for anyone who can stand up and dance. And “dance” is a very liberal term here, as no dance experience or skills are necessary. People of all ages, shapes and sizes are welcome and encouraged to attend classes. I’ve taken Zumba classes and had a blast with everyone from a 70-year-old man to an obese woman starting her weight-loss journey, to a high school cheerleader. If you can shake your booty and like fun music, this class is for you.

What to Expect in Zumba Class
Most Zumba classes are an hour long. They begin with a dynamic warm-up and end with a cool down and some static stretching. The workout portion is broken down by song, each with a different dance routine. While many of the dance moves instructors use are pre-choreographed by Zumba, instructors often add their own flair, dance steps or even create an entirely new routine to their favorite songs. Common moves in class are mambas, V-steps with exaggerated hips, cha-cha-chas and side touches.

Unlike other aerobics classes, where you learn a move and then add on more moves to create a routine, Zumba uses different parts of the song, such as the chorus or a particular phrase or sound in the song, as the basis of its choreography. For example, in one class I took, each time the vocalist made a kissing sound, we would shake our hips to the side.

Zumba is also unique in that its instructors don’t speak much. Instead they cue you on what to do with hand signals of which direction to move, or a loud hand clap that signifies that it’s time to move to a new move. Overall, participants learn as they go through repetition and by example. This can be frustrating for first-timers, but because Zumba uses a lot of the same songs over and over, you will get the hang of it after a few Zumba classes.

What to Wear to Zumba Class
It’s important to wear clothing that is moveable, breathable and will wick sweat away. Because of how popular the classes are, the room can heat up fast, so consider dressing in layers that you can remove. Also, sport a pair of supportive fitness shoes that allow you to pivot your feet easily.

What to Bring to Zumba Class
Bring a towel and a water bottle because you’ll need them! And unlike some fitness classes, you’ll have ample time to use these items. Most instructors give a short 30- to 60-second break between songs. Also consider bringing aheart rate monitor to see exactly how hard you’re working.

Where to Find a Zumba Class
Zumba classes seem to be popping up everywhere these days. If you belong to a gym, ask them if they offer Zumba. If they don’t, use the “Find a Class” option on Zumba’s website. If there isn’t a class in your area, consider investing in Zumba DVDs or video games.

More Zumba Tips
For your first class,show up 10 minutes early and introduce yourself to the instructor and inform him or her that you are a beginner. Ask what you can expect in the class and where you should stand so that you can see the instructor’s full body. Then, enjoy the experience! Don’t take yourself too seriously. Don’t worry if you are unable to get all of the steps the first time around: no one does. The steps will come easier after a few classes. Also, if you try one instructor and you’re just not a fan (or the class is low-energy), try a different instructor. Some instructors will gravitate toward one or two styles of dance or music, so find the one that you like best!

Zumba is one of the highest energy workouts I’ve tried, and it’s the most fun, too. Most of the time it really doesn’t feel like you’re working out at all—you just get caught up in the fun of the music and the moves. Before you know it, a whole heart-pumping hour has passed! If you like a good sweat, then you’ll love Zumba.